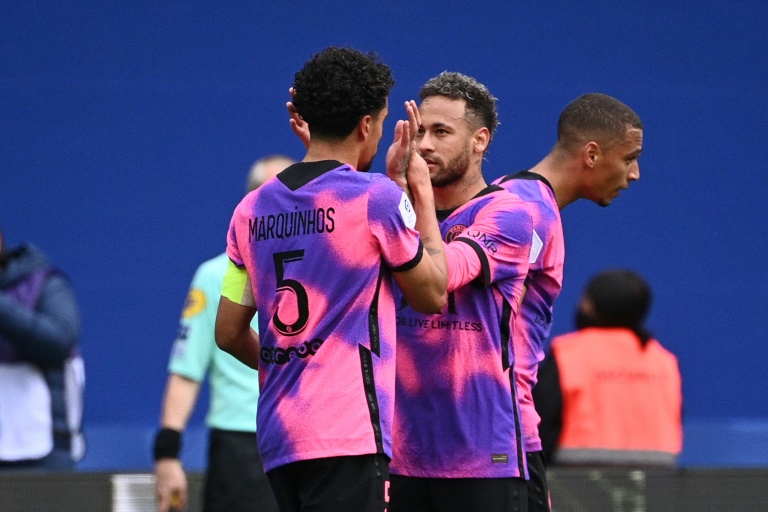 Paris (AFP) – Paris Saint-Germain coach Mauricio Pochettino is confident Kylian Mbappe will be fit to face Manchester City on Tuesday after the France striker was forced to watch from the stands as Neymar scored one goal and set up the other in a vital 2-1 win over Lens in Ligue 1 on Saturday.

Neymar netted on 33 minutes and his corner was headed home by Marquinhos just prior to the hour mark at the Parc des Princes, with Cameroonian forward Ignatius Ganago pulling a goal back for Lens.

It was a huge three points for PSG in their attempt to retain the Ligue 1 title, as Pochettino’s side move provisionally two points clear of Lille at the top of the table.

However Lille can return to the summit by beating Nice at home later on Saturday, while third-placed Monaco will return to within a single point of PSG if they defeat Lyon on Sunday.

There will be just three rounds of matches remaining after this weekend.

Mbappe was reduced to the role of spectator because of a calf problem, while Angel Di Maria was also left out of the starting XI as Pochettino made six changes to his team from Wednesday’s 2-1 home defeat against City in the first leg of their Champions League semi-final.

“I am always optimistic and I still am,” Pochettino told broadcaster Canal Plus when asked if he expected Mbappe to play at the Etihad Stadium.

“We think he will be there but we will make a decision before the game.”

PSG are looking to win their eighth Ligue 1 title in nine years and, given how close the title race is in France this season, they could not afford to take it easy in between the two legs of their tie against City.

Lens had beaten the Parisians at home back in September and travelled to the capital on a run of 13 games unbeaten that saw them come into the weekend in fifth, just ahead of Marseille in the fight for France’s last European qualifying berth.

They gave the reigning champions a run for their money and the tension got to PSG sporting director Leonardo, who was caught on camera angrily remonstrating with the officials in the tunnel at the end of the game — his mask under his chin — apparently over what he felt was some rough treatment for Neymar.

The Brazilian had scored the opener, just his seventh Ligue 1 goal of the season, taking a touch and finishing after Argentine defender Facundo Medina tried to play the ball back towards his own goal under pressure.

Pablo Sarabia came close to adding to PSG’s lead before the break but they went 2-0 up on 59 minutes.

Marquinhos had scored with a header from a corner against City and he repeated the trick here, heading in Neymar’s delivery from the edge of the six-yard box.

Lens got one back straight from the restart as Arnaud Kalimuendo’s attempted overhead kick from a Jonathan Clauss cross turned into a perfect assist for Ganago to score.

However, Lens could not find an equaliser and PSG thought they had a late third goal when Mauro Icardi turned in substitute Marco Verratti’s low centre.

However, an offside flag against Verratti cut short the celebrations.

“We deserved the victory even if it wasn’t a brilliant performance,” admitted Pochettino, before turning his thoughts to City.

“Every game is different, and so is every competition. We needed the three points today to stay in contention to win the league, and on Tuesday we will need to score two goals to win against City.”