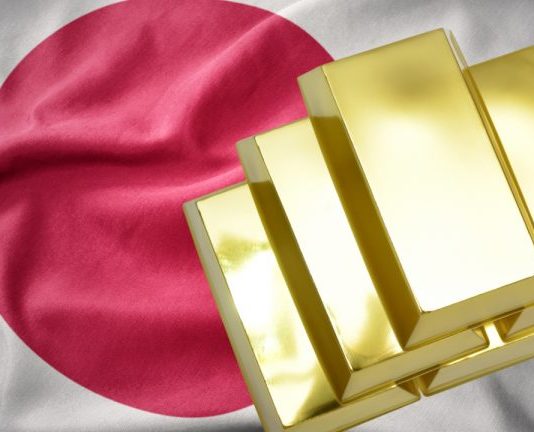 Japan’s finance ministry has reportedly leveraged 80 tons of gold to help fund part of its huge stimulus package aimed at combating the coronavirus crisis. The Asian country, which is saddled with public debt twice the size of its economy, is under pressure to find non-tax revenues to cover the rising cost of spending to deal with the health crisis.

The Covid-19-induced recession has seen Japan’s tax revenues drop, leaving a significant hole in its budget. According to a report, before this “rare arrangement,” Japan’s finance ministry would normally “tap reserves set aside as special accounts, and profits the Bank of Japan (BOJ) and other agencies return to state coffers after they close their annual books.”

However, this year’s recession has forced the ministry to enter into an arrangement that involves the BOJ as well. Explaining how the deal was carried out, the report says:

The ministry’s division in charge of international affairs sold a portion of dollar reserves to the BOJ. With the yen it received, the division bought gold from another division of the ministry in charge of debt management.

Meanwhile, the report quotes two anonymous individuals who reveal that from the gold sale, the ministry’s “division in charge of debt management gained proceeds worth $4.84 billion (500 billion yen).” The individuals add that these proceeds will “finance a new fund aimed at boosting research and development at universities.”

In the meantime, the BOJ announced on the same day that “it would buy dollars from the ministry as a precaution against any market disruptions caused by the pandemic.” According to the analysts interviewed, Japan may have resorted to this approach because it “wanted to avoid issuing too much debt or using taxpayers’ money for the fund.”

What do you think of Japan’s decision to leverage gold? Share your views in the comments section below.

The post Japan Leverages 80 Tons of Gold to Help Fund Part of Its Stimulus Package appeared first on Bitcoin News.

The post Japan Leverages 80 Tons of Gold to Help Fund Part of Its Stimulus Package appeared first on GQ Central.