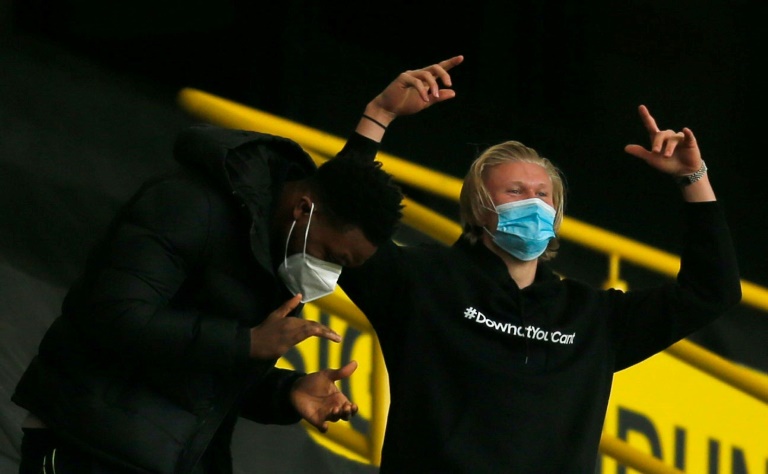 Dortmund (Germany) (AFP) – Borussia Dortmund are  facing a wait to see if Erling Braut Haaland can shake off a leg injury to be fit for Thursday’s German Cup final.

Haaland has scored 37 goals in 38 games in all competitions this season, but sat out Saturday’s 3-2 Bundesliga win over second-placed RB Leipzig.

Haaland celebrated in the stands as England winger Jadon Sancho scored twice to seal the win which confirmed Bayern Munich as champions for the ninth straight season.

The striker has missed Dortmund’s last two matches, but the club hope Haaland can take a full part in training next week to be fit for the Cup final, also against Leipzig in Berlin.

“We will have to see,” said Dortmund coach Edin Terzic when asked about Haaland.

“He has a deep bruising which is proving very stubborn and has built up a lot of fluid.

“We just hope that it will reduce from day to day and he will be back at the beginning or middle of next week.”

Haaland punched the air as Sancho’s second goal three minutes from time sealed a victory which lifted Dortmund into the fourth and final Champions League place.

Dortmund are also waiting on the fitness of goalkeeper Marwin Hitz who had to be replaced at half-time after a heavy clash with centre-back Manuel Akanji at the end of the first half.