Clothing the Naked Emperor – the Blockchain Potential Unleashed With Prasaga 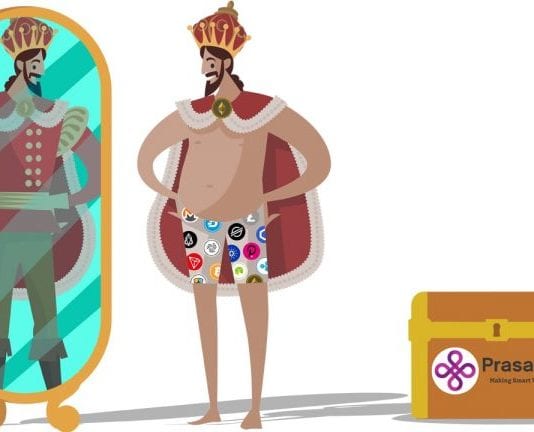 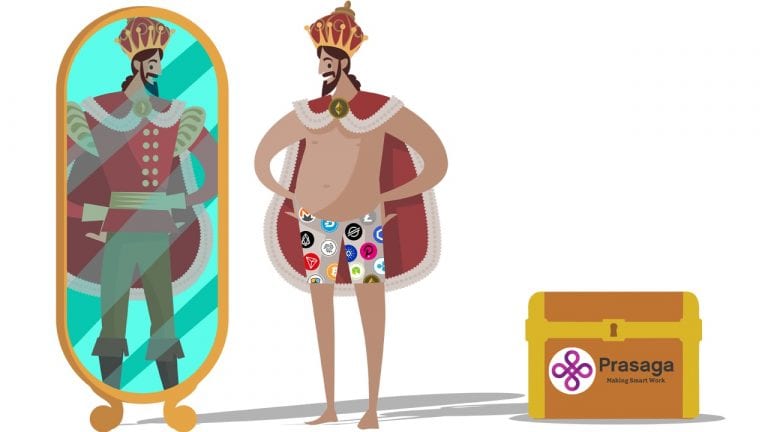 Prasaga is a Foundation-based organization and the creator the DataGrid Blockchain, a new native chain and coin project, embracing developers, miners, and token holders. DGB will be language agnostic, allowing developers to have full code reuse on a global scale, which will greatly reduce development time and complexity.

In the much-beloved folktale “The Emperor’s New Clothes”, the author Hans Christian Andersen portrays a ruler, hoodwinked by weavers who play on his vanity, by saying that the suit he wears is visible only to those who are clever and wise, and who can speak the coveted language of Solidity.

As the ruler addresses his subjects, fiercely proud of his garb, which of course is the finest in the land, he fails to realize that he, in fact, is actually wearing nothing at all. The ruler, turning from unabashed to humiliated, learns the powerful truth: you can’t let pride and fear of looking ridiculous keep you from speaking up when you know the truth.

One of blockchain’s primary contributions to the world has been the introduction of speculative tokens and now, with Decentralized Finance’s (DeFi’s) automated market making and liquidity pools it is also a wide variety of unregulated financial derivatives. It is the distributed ledger technology potential on an enterprise scale, however, which was the catalyst for the AWS, Microsoft, Oracle, SAP, and IBM adoption. Large-scale technology companies are deploying forward-thinking blockchain technologies, catering to a variety of applications, primarily on private chains. The truth of the matter is – when it comes to blockchain technology, everyone is still looking for the emperor’s clothes — applications which will reinvent the future.

On the other side of the spectrum are the permissionless chains, which do not scale to even a fraction of transaction capacity required to be equal to current payment solutions, let alone the scale required for the future of society. A wide-scale technology deployment is extremely hard to engineer, difficult to expand and maintain, and vulnerable to bad actors exploiting its weaknesses.

This naked truth makes selling the bright future promised by the decentralized immutable technology very difficult. This is where the DataGrid Blockchain (DGB) brings a vibrant new suit of clothing for the Emperor King.

The innovation that re-imagines the way distributed ledger technology should be architected for efficiency gains starts with putting a revolutionary layer 1 approach to the blockchain network by dressing it with a full eXtensible Blockchain Object Model (XBOM) Operating System. XBOM makes it easy to develop on the blockchain without having to write directly on the ledger by introducing a class management infrastructure. The operating system allows each individual grouping of code to be stored in accounts on the blockchain, unlike today’s Smart Contract platform’s implementation choices.

Compare writing a Smart Contract to writing the entire Word processing application just to create a document. With XBOM the needed code resides on the blockchain allowing developers to simply call the code required to directly execute even the most complex transactions.

The DataGrid Blockchain (DGB) will be language agnostic, allowing developers to have full code reuse on a global scale, which will greatly reduce development time and complexity. The real fine attire is the invention of Smart Assets which are stored directly in the accounts on the DataGrid Blockchain. In turn, their state is stored within each smart asset instance, in the accounts rather than in Smart Contracts. Accounts and their state can now be moved across shards enabling full parallelization and allowing the speed of DGB to increase as more nodes are added which will allow the scaling of transactions to only be limited by the bandwidth capacity of the Internet.

This process establishes a fast scaling technology, allowing DGB to reach the limits of network bandwidth without being limited by each shard’s individual speed. DataGrid is also easy to use for both the developer and the customer as they do not need to ever use the underlying blockchain code. And, most importantly, it’s safe from reuse of object code and the mitigating security issues which may occur on public blockchains.

The Emperor has new undergarments and base layers now. He is covered at least. Now what makes him presentable and attractive to the populous? Which elements are needed to attract even the most critical of fashionistas?

First, one must ensure that the fabric is protected from the elements and to this end, DataGrid has created a function that will allow anyone or any entity to have a Globally Unique ID. An account number, made up of a 512-bit unique alpha-numeric string. This string, however, is hard to remember, so there needs to be a way to easily attach the accessory. This means converting it to an account name that users can choose. Think of this as a personal website domain, but better! It protects all of the user’s assets, vital records, regulatory compliance approvals and the state of all actions from anyone interacting with an user’s account during its lifetime.

The voting concerns in the US and in other countries brought about the debate around (voter) identity and a much needed upgrade of voting systems.

“The use cases for blockchain voting software are many and diverse. Its ability to engage and manage a constituency is crucial to the future of society,”

“not just to produce a transparent outcome but to encourage all people to participate in their communities. Currently, the technology is still in its infancy, but it matures alongside the young voters it will one day help and looks to be a key part of our collective future.”

How can the Emperor achieve a truly democratic society, where the voting infrastructure enables anonymity, where the public participates in voting, with the assurances that one person has one vote, while the result is immutable and transparent? This is what the DateGrid Blockchain promises to achieve with the XBOM operating system.

The one account on DGB can hold IDs, National Driver License/IDs, passports, government social numbers. The individual identity documents are a subset of the global UniqueID. A voting certificate assigned to an individual will automatically provide the right to cast a vote in the local election.

When voting seasons start, users can request their class:vote object to be instantiated within the account. Once all credentials are identified, the voting rights certificate is added. If there are any missing elements in the certificates or other authorizations that are used as the personal identifier, the account automatically looks up the “Account Object Containment Tree” to find an instantiated object in the account with the appropriate authorization and continue with your right to participate in your nation’s vote.

Everyone who is eligible to vote based on their nation’s laws will now participate in the vote.

Anyone who do not have the proper credentials will never receive the vote certificate and will not participate in the process. The Emperor can rest assured that his populous is legal, secure and trustworthy. The one place blockchain cannot ensure valid vote is with the individual themselves. Although it can be guaranteed that it is the person voting via biometric checks, it cannot be guaranteed that they have not sold their vote or are being pressured by external actors. To circumvent this, a vote panic button in the interface enable users to contact the local police for assistance.

The ERC-20 DGT private presale will begin on 22nd January 2021, whereby the native DGT currency will be available for purchase at an initial price of $.005. These tokens will unlock in 3 months (91 days) after the Liquidity Bootstrap Pool and will start the unlock period once the listing is done on a decentralized exchange. There will be a 20% bonus for purchases of over 150 ETH, and 10% bonus on purchases starting at 80 ETH. The Community Presale has a 1/4 ETH minimum and 5% bonus, beginning January 22nd. This amount will reduce by 1% per day until January 26th. The sale has a $6m soft cap and a $25m hardcap.

Solving real-world problems is why everyone got into blockchain. The DataGrid Blockchain will be able to create this new paradigm for developers and consumers. Prasaga has set up DGBLabs.io for its Estonia-based token offering and is conducting its Community Presale from January 22nd to the 25th. The team will then begin the Balancer Liquidity Bootstrap Pool on February 14th. So if you fall in love with this project you can enjoy a 96 hour LBP that is resistant to bots and whales and lets humans determine the true market price, before ERC-20 DGB launches onto the general DeFi pools.

The challenge of the future is being authentic and truthful about what the Emperor is actually wearing, and not letting the tailors hoodwink you. The real break-through happened for the Emperor when he admitted he had no clothes and the crowds could admit they had been pretending that the protocols could scale. Now you can examine the DataGrid Blockchain and honestly evaluate how it will create a new designer suit of clothes for everyone.

To join the next paradigm of blockchain, get whitelisted on the DGBLabs website today.

This is a sponsored post. Learn how to reach our audience here. Read disclaimer below.